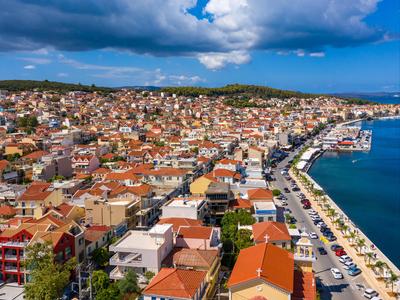 Contras: "I wasnt accomodated for my meal preference. The cabin was old and creaked alot. I was not informed by kayak of absence of luggage allowance"

Prós: "Very punctual and easy. Very friendly crew."
Contras: "The seats feel small both in width and in leg room. Online check in did not work properly--I got a message that I was put on the stand-by list."

Contras: "We couldn’t check in until 90 minutes before Departure."

Contras: "Charged me $70 and made me check my bag as I was boarding. Had no other option"

Contras: "Everything. Our flight delayed that can happen. But what can’t happen is the total lack of service. Shame No wonder Greece is bankrupt. Zero zero"

Prós: "Very nice crew, had trouble with boarding"
Contras: "Boarding. They couldn't figure out to make people queue up. It's not a hard job, but they looked like they were struggling. It made me feel like I should step on and help"

Prós: "Everything think was good! The pilot too strong"

Contras: "The agent at check in refused to even consider a business class upgrade, said I had to do that 48 hours in advance. Seems like a stupid policy to me, unless she was just flat out lying to me."

Contras: "Connection flight was not accessible because of the arrival delay. Airline staff did not help at all."

Prós: "Nothing."
Contras: "I'm a photographer on a 3 week trip. I have luggage. Unless you take the ferry, there are limited airline options to Cyclades. Aegean really doesn't want you if you have luggage. Felt like I was being scolded. True, I'm trying to be frugal and avoid a big investment in shock-proof luggage and/or checked baggage fees, but as long as it fits under my seat, what's the big deal? I'm sure I easily weigh at least 70 pounds less than the person sitting next to me, so the extra 4 kg in a backpack that I (female) can personally carry shouldn't be an issue. Then, there's no jetway. You leave the gate to board a bus that takes you to a plane on the tarmac where you must climb a rather large flight of metal stairs. Reverse direction, It takes quite some time and a few crew members to assist those with disabilities to deplane. All the time the rest of the passengers are waiting in the bus to get to their connections. Would only ever fly this airline again if it was the only option to get where I want to go."

Prós: "Crew was kind and professional Flight was overall comforable"
Contras: "On my return flight to Athens from London, I was told that my hand luggage was too large and needed to be checked. I had to pay an extra 55 pounds (75 USD) to check the bag. On my Aegean flight to London a few days before, I was able to check the bag for free. I do not understand why I was charged for the bag on the way back but not on the way over. $75 is half what I paid for the flight itself - seems way too much just to check a small bag. I will keep this in mind when considering flying with Aegean in the future."

Prós: "short flight but managed to get some coffee/food, very helpful and polite crew as always"

Prós: "We liked that there was food offered on such a short flight and complimentary wine! The crew was also really nice."
Contras: "There was a 45 minute delay on our flight"

Contras: "The flight was delayed 3 hours and there was very little information offered as to what to expect. I was grateful I did not have a connecting flight as surely I would have missed it. The gate agent seemed to be completely lost and at one point started boarding and then had to ask those that had boarded to deplane. The seats were rather uncomfortable to begin with but then add to that being in the last row next to the toilets and the galley AND with crew members stepping on the side of my seat to reach supplies in the overhead bin without warning."

Prós: "N8ce airline attendants and they even served lunch!"
Contras: "All was fine"

Prós: "I liked that I was going to Israel – I didn't like being an hour and a half late losing my luggage and not knowing when I'm going to receive it"
Contras: "Lost my luggage – plain one and a half hours late"

Prós: "I enjoyed the crew and the food."
Contras: "Not enough room. I'm not a tall person and my legs we're smashed against the seat. The person behind me was an adult and kept hitting my seat so I could get no sleep."

Prós: "I slept through most of the flight."
Contras: "Everything else. Especially that I had to pay $60 for one luggage."

Prós: "Snack was a light meal of pasta with melted white cheese & spinach, bread sticks, and a pastry/cookie. Yummy!"
Contras: "Plane remained on tarmac for 45 minutes before leaving causing us to be about 1 hour late."

Contras: "Doesn't mention on kayak that the flight was low-cost flight and that we need to pay extra for luggage. we had to pay it on the check -in on airport and it was so expensive."

Contras: "Bag fees for 2 20KG bags were about as much as the ticket, not worth the cramped seats and lack of services."

Prós: "Everything was very good"
Contras: "No entertainment"

Prós: "Because of Aegean's transfer director mistake, I missed my two connecting flights back to the US and representatives did nothing to help me. I ended up buying new flight tickets plus money for a night in athens hotel."
Contras: "Aegean's representatives at Athens airport, especially the manager at the check in counter. Terrible customer service."

Contras: "Didnt have too much time for flight change.There should be separate control scaners for ppl that are changing flights."

Prós: "The line at the airport was moved quickly and efficiently by the staff."

Contras: "We were delayed almost 3 hours and we're not provided with the reason for the delay except for "technical difficulties" at airport"

Contras: "I had only one piece of luggage to check in, and I had to pay for it as if it were a second piece which we sometimes have to pay extra for. In which world would a traveler to a outcry country travel without luggage???"

Contras: "Attitude to the clients was really appalling"

Contras: "When I arrived to the airport they told me my ticket had been canceled with no explanation. After 40 min they got me on the flight. I am still not sure exactly what the issue was"

Prós: "Not much"
Contras: "The CHEAP profiler of a CEO this airline has as its head. As it stands, Ryan isn't worth saving."

Contras: "The flight was delayed because of meteorological issues, and the time we had to wait on the plane could be minimized with some food and water"

Prós: "I loved the fact that I arrived"
Contras: "Everything else. Deservedly the worst airline in Europe"

Contras: "Got asked several times for passport checks, about six times. Didn't quite understand why so many. Not many seats in Lisbon airport. Same with toilets."

Prós: "Amazing crew"
Contras: "It would be nice if the back of the chair was reclining"

Prós: "There was nothing that I liked about Ryanair airlines"
Contras: "A kiosk center will be easier for check in at the airport. People would not miss their flight or complain about crowdiness. Paying for a boarding pass in absurd. If a person paid for their flight they should not have to pay for a boading pass. The Ryanair App has technical difficulties"

Prós: "The price of the flight"
Contras: "1 hour late departure"

Prós: "We got there eventually"
Contras: "No updates on why we were late. Then checked us in after the time of them posted delay just to make I stand 20 minutes outside in cold enough temperatures that you can see your breath. Why bring us outside? Ryanair is horrible"

Prós: "Inexpensive, quick flight."
Contras: "Too much waiting. The process was to just herd you to the next corral for more waiting. Boarding process was much longer than need be. They charge for EVERYTHING! My husband and I were sitting separately, but the boarding pass only came to me electronically. For whatever reason, the forwarded email, or screenshot would not go through to him. We asked if they could print us one, they wanted €20. Seriously? However, I saw the gate lady print for several others with no charge.....hmmmm."

Prós: "Nothing"
Contras: "Everything ! Delay, no info (absolutely no info! Regarding the delay. I would never, ever choose RyanAir again !"

Prós: "Price"
Contras: "Horrible experience. Queued on foot at gate for ages including 15 mins waiting on tarmac outside plane in blazing sun. Luggage took one and a half hours to appear after landing. Ridiculous baggage arrangements which seem to be designed to save Ryanair airport handling charges. You take your bag through security as hand baggage which means no liquids but then it’s put in the hold and you have to wait for it on arriving. As usual with Ryanair, maximum inconvenience to passengers."

Contras: "They delayed the flight from 8:55 to 10:15 but we didn’t board until about 11. They left us outside in the cold and extreme wind instead of having us just stay inside until the plane was ready. When I complained the employee said there was a woman onboard with a wheelchair and they didn’t have a way to get her off. When we finally got on takeoff was delayed another hour. They blamed all of this on air traffic control staffing in France, didn’t take any responsibility for the delay with the wheelchair. Ryanair is a disgrace."

Contras: "More one and half hour fight delay. Plus terrible queue at border control."